After four years of construction work, the Count and Countess Louis d’Harcourt moved in 1900.

The architect COULON, very well-known in the 19th century, was inspired by 18th century plans hence the harmonious proportions of Pont-Chevron. It includes a set of buildings (the castle, the stables…) surrounded by a 9 hectares garden “à la française” decorated with NELSON sculptures, a rose garden and a vegetable garden with its large greenhouse.

Access to the castle is via the Receptions rooms placed opposite, overlooking the main courtyard and including the stables, the chapel, and the gîtes..

Behind the castle, the gaze is lost on a perspective of 2.5 km above a 27 hectares lake lined with hundred-years-old trees offering to visitors a lovely walk.

The Pont-Chevron site is historically very rich as illustrated by:

⁃ The remains of a dungeon dating from the 12th century, on the shore of the lake

At the request of Count Louis d’Harcourt, his architect Coulon designed the stables at the same time than the castle hence the perfect and very pleasant architectural harmony between the two buildings. The stables have been entirely renovated recently and transformed into reception rooms.

Inside, the main reception room covered by a glass roof reflects the search for openness and light. Thanks to the harmonious architecture of the two buildings (the castle and the stables) located in a magnificent landscape, Pont-Chevron is classified as Monument Historique.

The Receptions rooms have also a chapel dedicated to Sainte Anne. 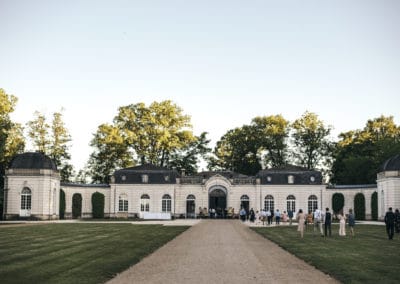 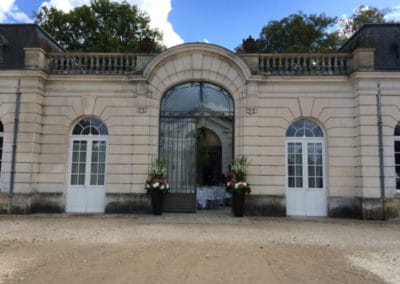 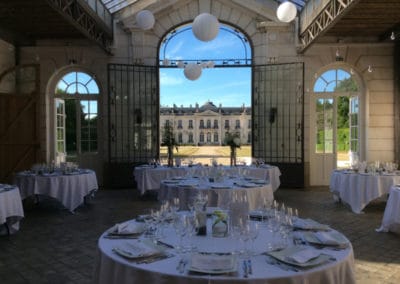 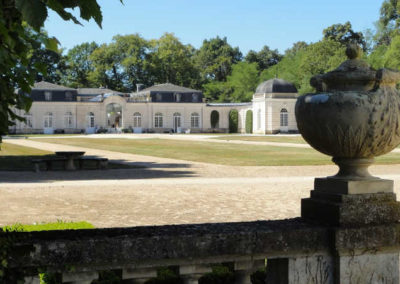 In the Middle Age, the Chevron family built a castle on an island in the middle of the lake, connected to the shore by a stone bridge. This old castle disappeared and in 1897 Count Louis d’Harcourt built the current castle and renamed it Pont-Chevron in memory of the Chevron family.

Throughout the last centuries, Pont-Chevron has welcomed well-known personalities, such as Queen Amélie of Portugal, King Alfonso XIII of Spain, world leaders, high ranking military officers, business leaders and CEOs, President of the Republic, ministers …
Count Louis d’Harcourt, diplomat in Asia and Europe, brought back many memories and friendships from around the world. His wife born Lanjuinais is the direct descendant of Jean-Denis Lanjuinais, one of the author of the French constitution of year II (1793) and one of the most illustrious men of law in France at the beginning of the 19th century.
Today, the Count and Countess Jean de La Rochefoucauld, descendants of Count Louis d’Harcourt, passionately perpetuate the life of Pont-Chevron.

The French-style park created by Count Louis d’Harcourt, or classic garden with trimmings and amenities, expresses the pure classicism in the art of gardens, with a continuous search for perfection.
The location of the castle offers a harmonious and soothing perspective on the water, which extends towards the horizon.
Count Louis D’Harcourt used to say: “My gaze is on tranquillity and I am serene looking at my park and my lake. “
His aesthetic wishes for plants and statues are directly inspired by the northern Italy gardens. It smartly inserts the garden into the landscape while maintaining the concern for perfect beauty. Terraced, regular, often linear, it gives a lot of space to water and the perspective it offers. 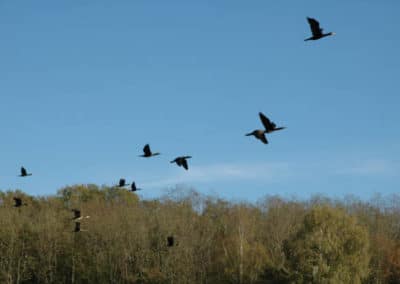 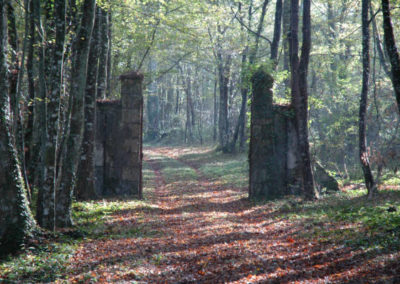 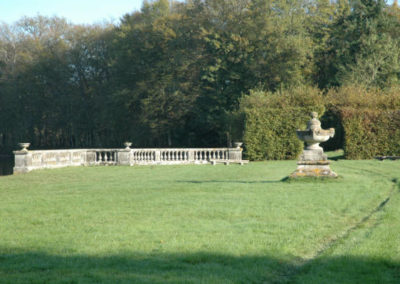 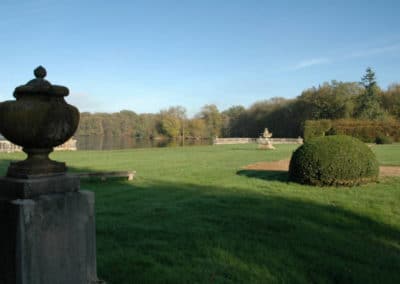 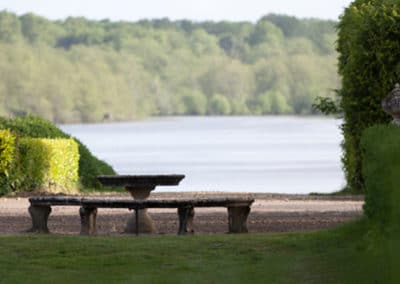 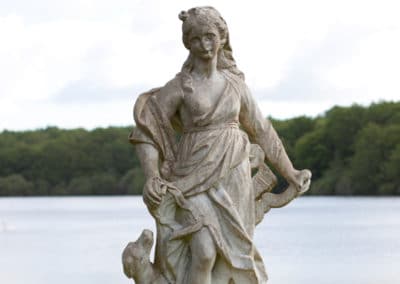 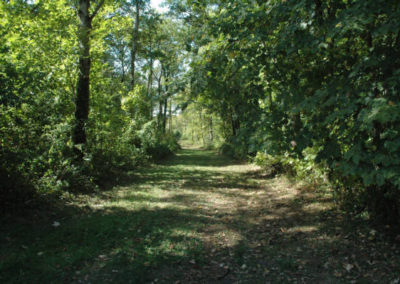 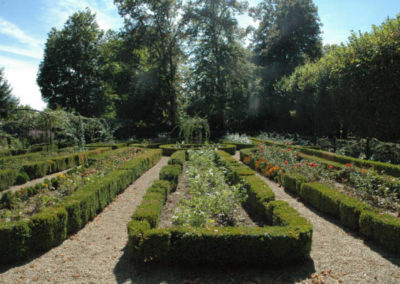 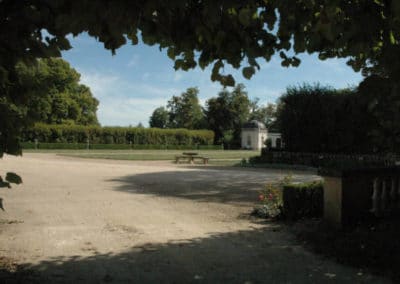 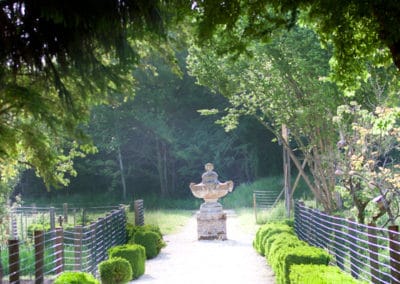 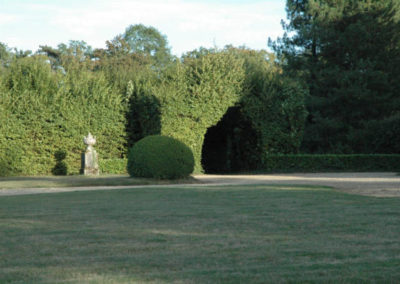 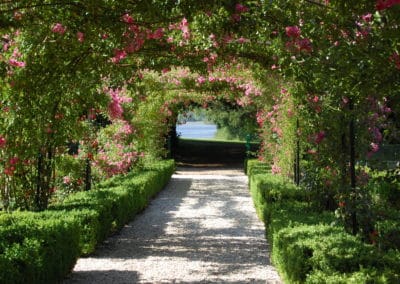 On the other side of the castle, the gaze flies over a 2.5 km long perspective starting with a green carpet, then the 27 hectares lake lined with trees, the whole offering a perfect peaceful harmony. 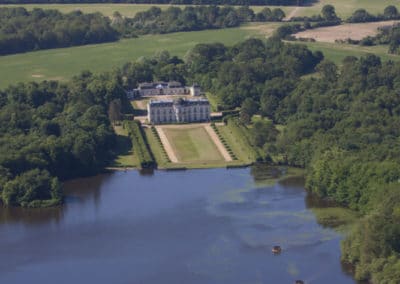 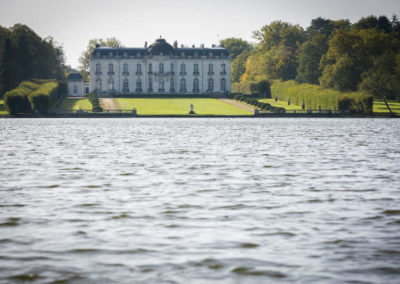 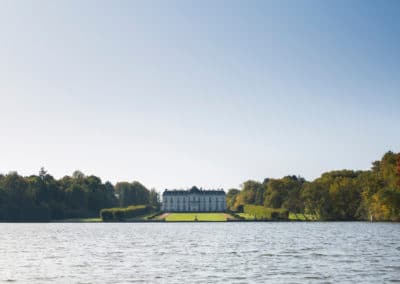 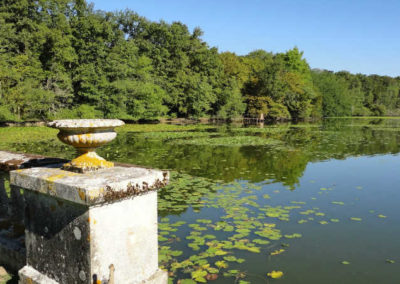 Our chapel located at the wing of the stables welcomes you for your religious ceremonies. 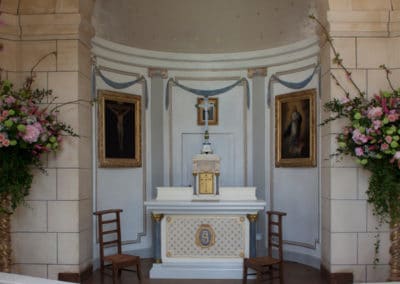